Arteriovenous malformations are congenital anomalies of the blood vessels. High pressure blood vessels in our body are called arteries and the low pressure vessels are called veins. Under normal circumstances these two systems are not connected directly. Blood from arteries has to flow first though tiny vessels (capillaries), where most of the pressure is lost. Atreriovenous malformation is a direct connection between arteries and veins. Blood is rushing into thin-walled veins in AVM. Small caliber vein walls cannot withstand the pressure force and often rupture causing sub-arachnoid bleeding or bleeding inside the brain tissue.

Almost 90% of atreriovenous malformations produce no symptoms and are detected accidentally on MRIs and CAT scans. AVMs may be found in any organ, but they are most symptomatic in the brain. There are three major complications of brain AVMs.

Hemorrhage (bleeding) is common. Statistically, there is 3% chance of hemorrhage per year in an average patient with brain AVM. Bleeding is usually less dramatic compared to ruptured aneurysm and the headache often does not have thunderclap qualities.

Blood degradation products from prior hemorrhages irritate nerve cells and cause another common complication – seizure disorder, or epilepsy. Presence of an arteriovenous malformation in the brain carries about 20% chance of epilepsy.

Another complication is a stroke caused by defective flow pattern in the brain tissue surrounding AVMs. Arteriovenous malformations consume a significant portion of the brain blood flow. Blood that flows directly from arteries to veins within the AVM is stolen from the normal local circulation. It causes shortage of blood flow in the surrounding normal brain tissue. Lack of sufficient blood supply may cause a stroke. 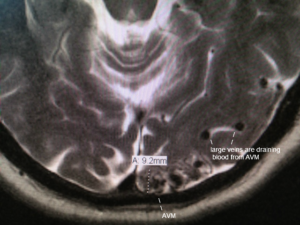 This is MRI image of AVM in the left occipital lobe. It is located precisely in the area responsible for the primary vision processing. In spite of advanced age, this person never had hemorrhage, stroke or seizure. Many years ago this patient had headaches with atypical visual aura sometimes followed by loss of consciousness. The AVM is small. The large dark holes on the right of the image are ballooned veins draining blood from AVM.

Treatment of arteriovenous malformations is required only if they produce significant complications. It is not possible to just remove AVM because it is made of blood vessels. The best modern treatment is typically performed by interventional radiologists. Ideally, the feeding artery is accessed endovascularly and plugged. This treatment method is called embolization. Another treatment option is a surgical intervention. Relatively recently Gamma-Knife found its use in the treatment of AVMs. Precisely targeted AVM feeding artery irradiation causes it to thrombose, which cuts of blood supply to it.

Your review is appreciated greatly!